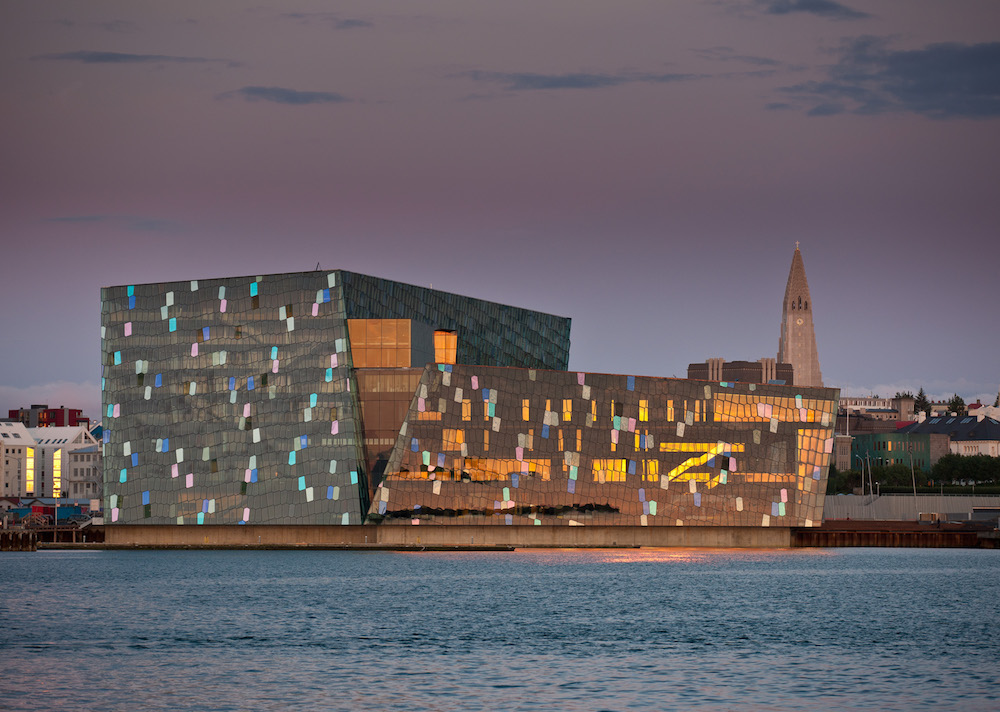 Earlier this year, I was invited by Icelandair and NYC Go to spend five days in Iceland and New York. Basically the best of two worlds. Two days in Iceland and three days exploring the less travelled New York. I used to live in New York and it always feels like coming home, although I got to experience new parts of the city that I had never seen before. Iceland on the other hand is a fairly new acquaintance. And as Rick Blaine said to Louis Renault in Casablanca: “I think this is the beginning of a beautiful friendship”. Iceland is definitely one of my new favourite destinations and I will have to explore further very soon.

When flying Icelandair to eg. the US, a free stop-over in Iceland is included on either way, so this is how to do two destinations on one trip. The flight from Copenhagen to Reykjavik takes about three hours. We were on the 13.00 flight arriving in Reykjavik around 15.00 (you gain one hour due to change in time zones). This left us with some free time during the afternoon to explore and one of the most delightful things about Iceland is the long days in about half the year. As a result of the location of this volcanic island, the winters are very short and dark, but it very quickly changes to longer lighter days. Going from Keflavik airport to Reykjavik takes about an hour and on the way, you can stop at a couple of places.

In the middle of a lava field in Grindavik you will find the Blue Lagoon. A man-made lagoon fed by the water output of the nearby geothermal power plant. The water (temperature of 37-39 degrees Celsius) is rich in minerals like silica and sulfur, which supposedly help skin ailments. It is the silicate minerals, which is causing the milky blue shade of the water. Go for a dip and use the mud in the man-made holes to give your body a mud mask. The lagoon can get quite busy, so try to come on a weekday. Nordurljosavegur 9, Grindavik 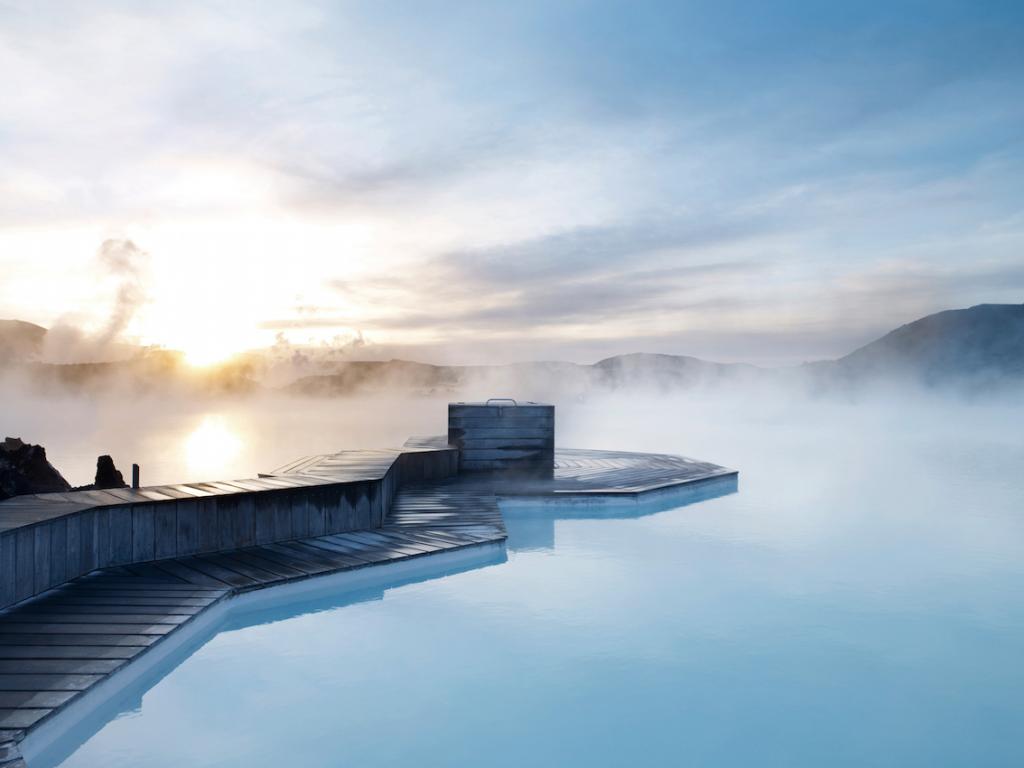 The Bridge between Two Continents

The entire area of Reykjanes in the Southwest lies on one of the world’s major plate boundaries, the Mid Atlantic Ridge. The bridge between two continents at Sandvik is a small footbridge, which will let you cross from one from continent to another. Skógarbraut 945, Reykjanesbær 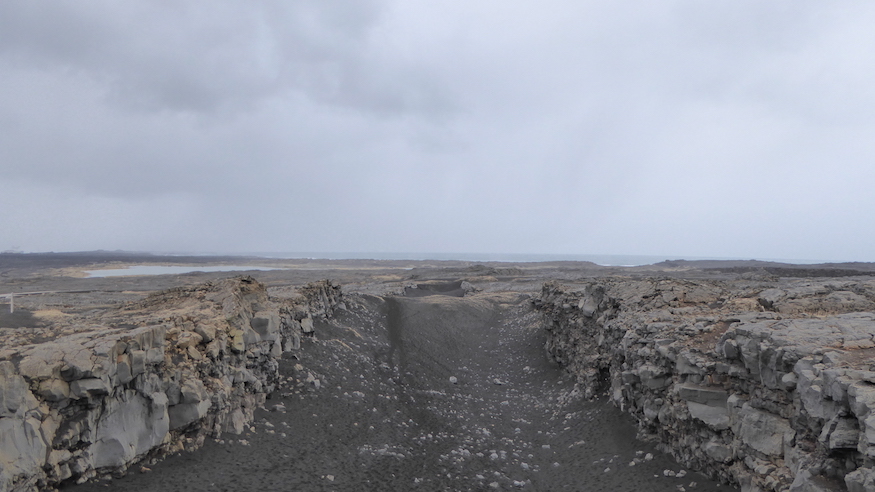 Life on Mars? Not far from the bridge you will find the area of Guunhver. Here you are able to experience the Island’s volcanic activity. Plenty of mud pools and steam vents among red earth will make you think that you have landed on Mars. Gunnuhver Geothermal Area, Grindavik 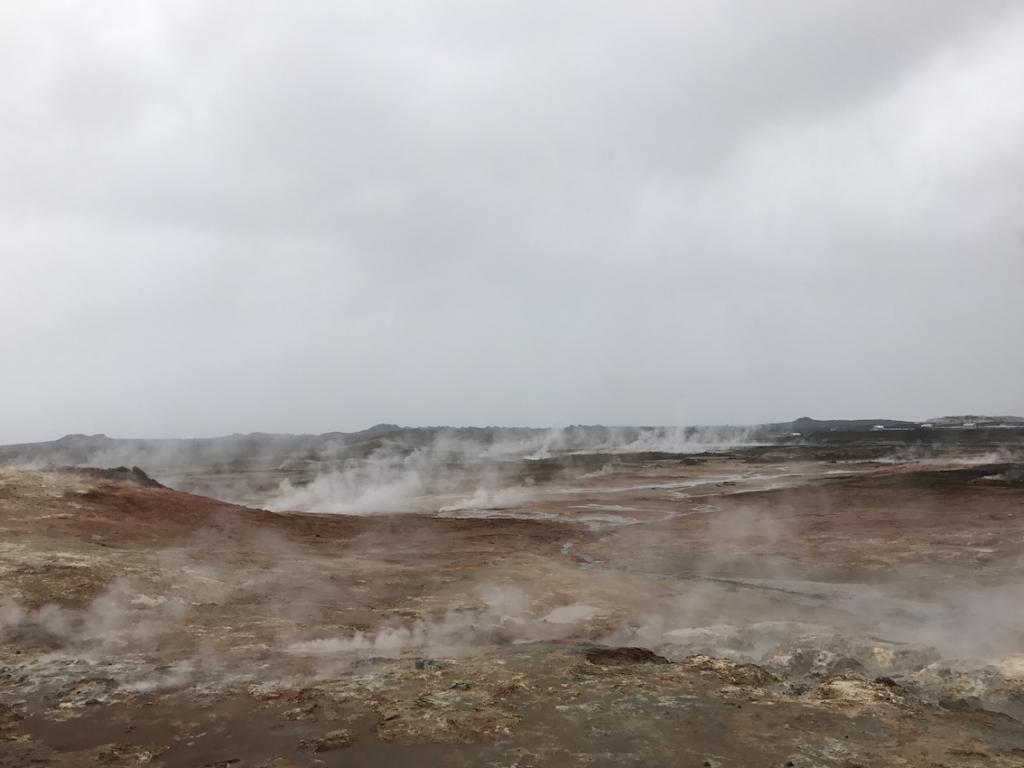 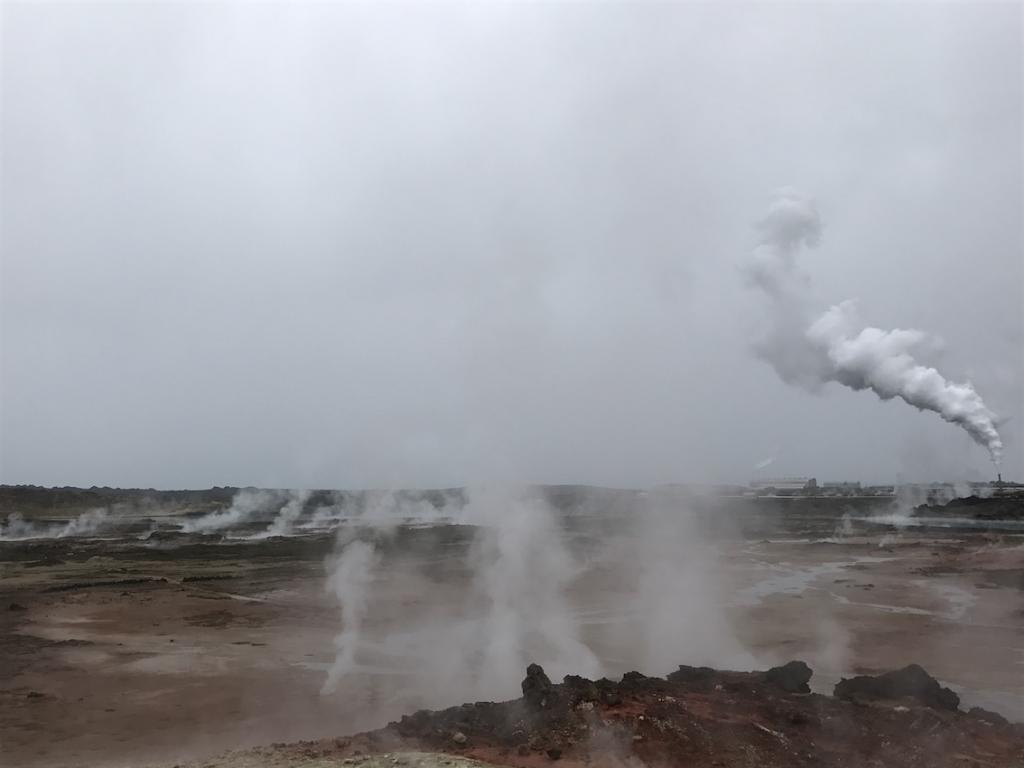 When we got to Reykjavik, we checked in at the new lovely hotel Canopy by Hilton. A new boutique hotel concept from Hilton Worldwide. Great coffee bar in the cosy lobby and happy hour with free drinks and snack from 18.00 – 19.00. Centrally located, most places are within walking distance in the small, but cute city of Reykjavik. 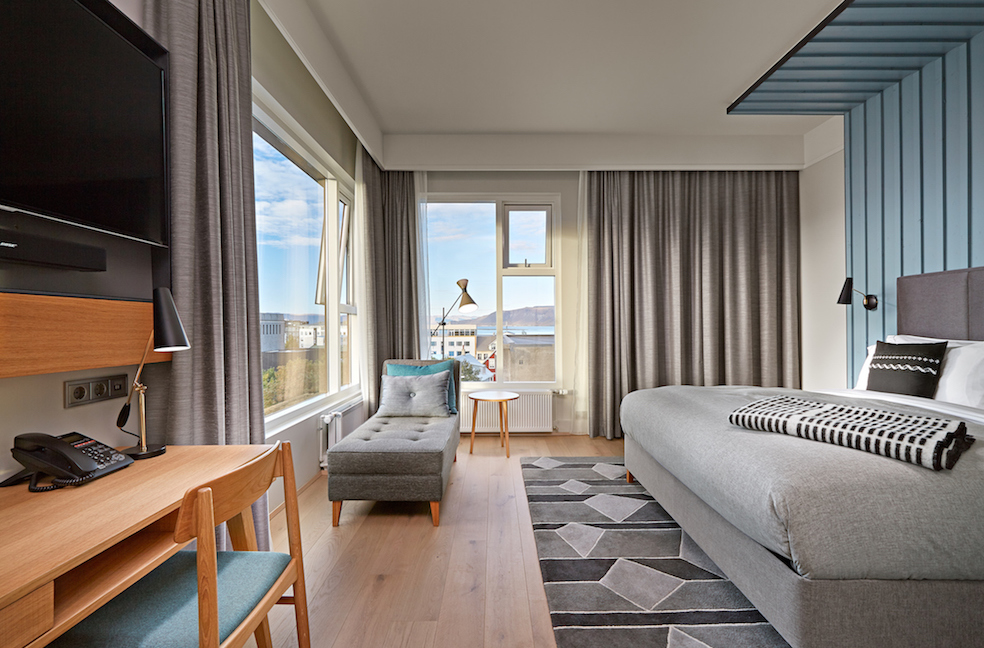 The opera house is an architectural pearl created by Danish Henning Larsen Architects in collaboration with Icelandic artist Olafur Eliasson. When the sun sets, the modern opera house located right by the harbour and with the view of the bay and mountains lights up. The whole house turns into a city rainbow. Austurbakka 2, Reykjavik 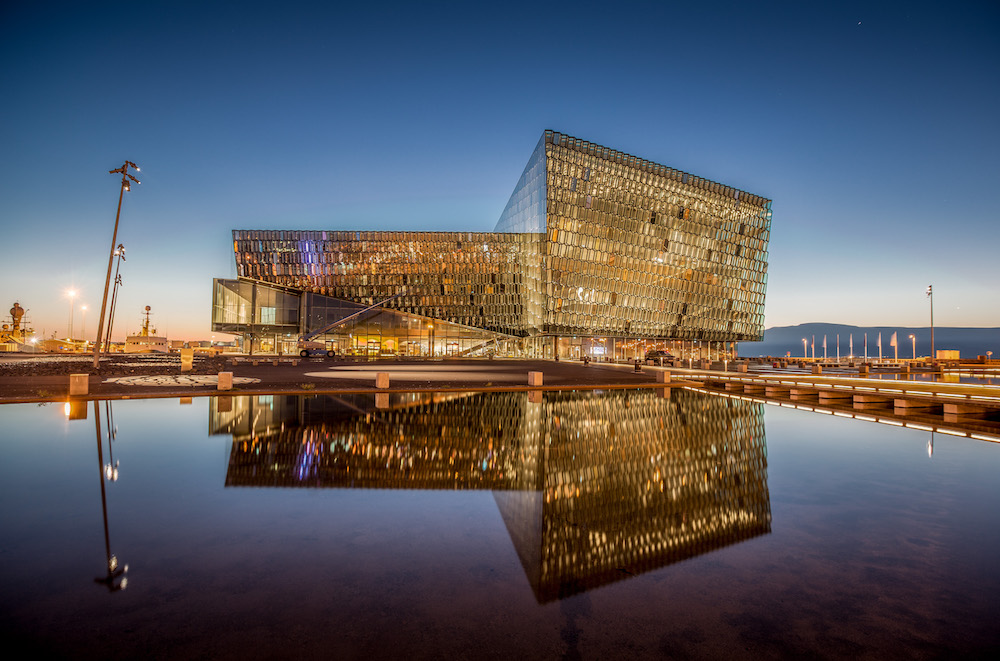 The iconic church on a hill in the centre of Reykjavik is the symbol of Reykjavik. Walk up through Skólavörðustigur, which is lined with different kinds of shops, to get to the church. If you are not afraid of heights, make sure to take the elevator to the top of the church tower. The view of the city and the entire is quite phenomenal on clear days. Hallgrímstorg 1, Reykjavik 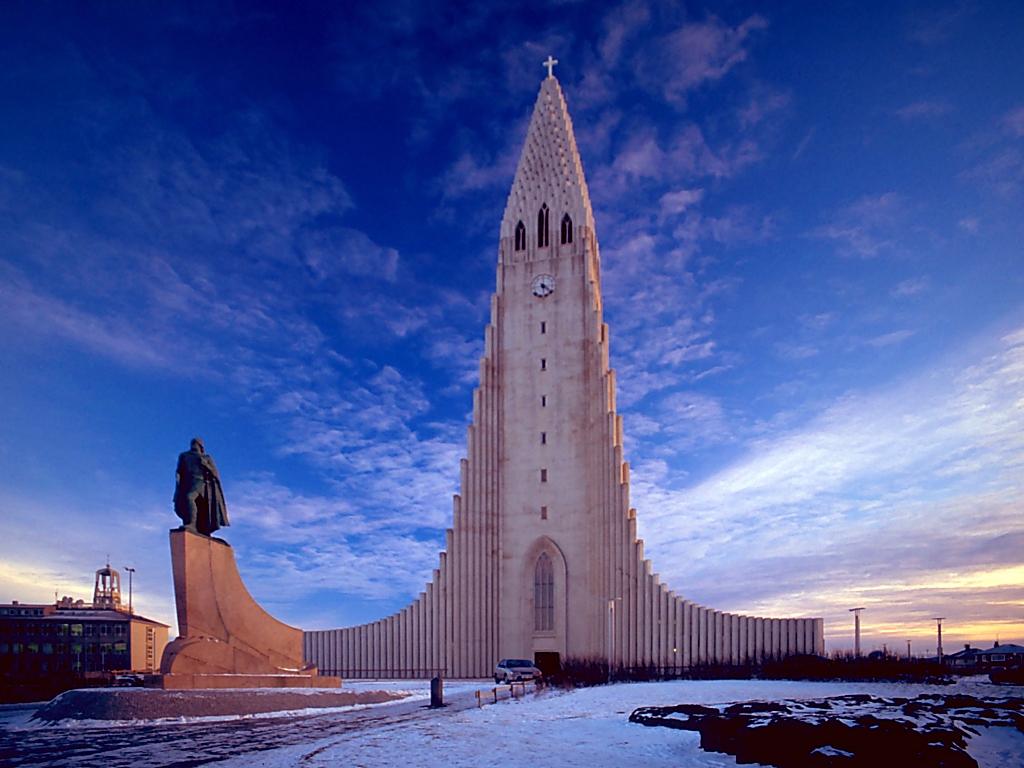 This is a Reykjavik institution by now. A seafood restaurant, where the draw is the fresh made creamy lobster soup. It is a no fuss restaurant. We lined up with tourists and locals, ordered our food and had our meal at long tables with other guests. The soup is delicious, you sit very close to the other guests, so you are bound to make new friend while dining. To give you an idea about the food, the people next to us had been there three times during their trip. And make sure to try the local soda Egils Appelsin, so delicious. Geirsgata 8, Reykjavik

After a lovely night’s sleep and a great breakfast at the hotel we were ready to take a drive east to explore before heading to New York. Here are activities that we did before the late afternoon flight to New York.

This national park is both of historical, cultural and geological significance. The Althing, the national parliament of Iceland, met here the first time in 1930 and continued to do so until 1798. There is a viewpoint and from here there are several hikes in the area. Þingvellir National Park, Selfoss

Right by the Laugarvatn lake there is the Fontana Spa. Here there are several outdoor hot springs, steam rooms and saunas. I started off by jumping in the icecold lake followed by a dimp in one of the hot springs. Vikings unite! The steam rooms are naturally sourced with hot healing steam directly from the ground below. Hverabraut 1, Laugarvatn 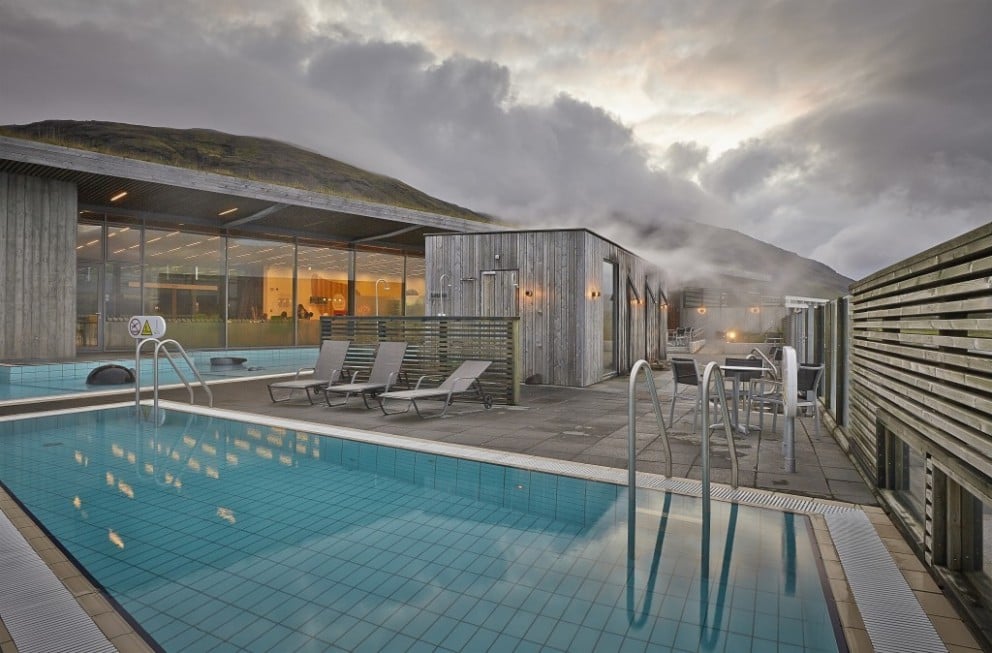 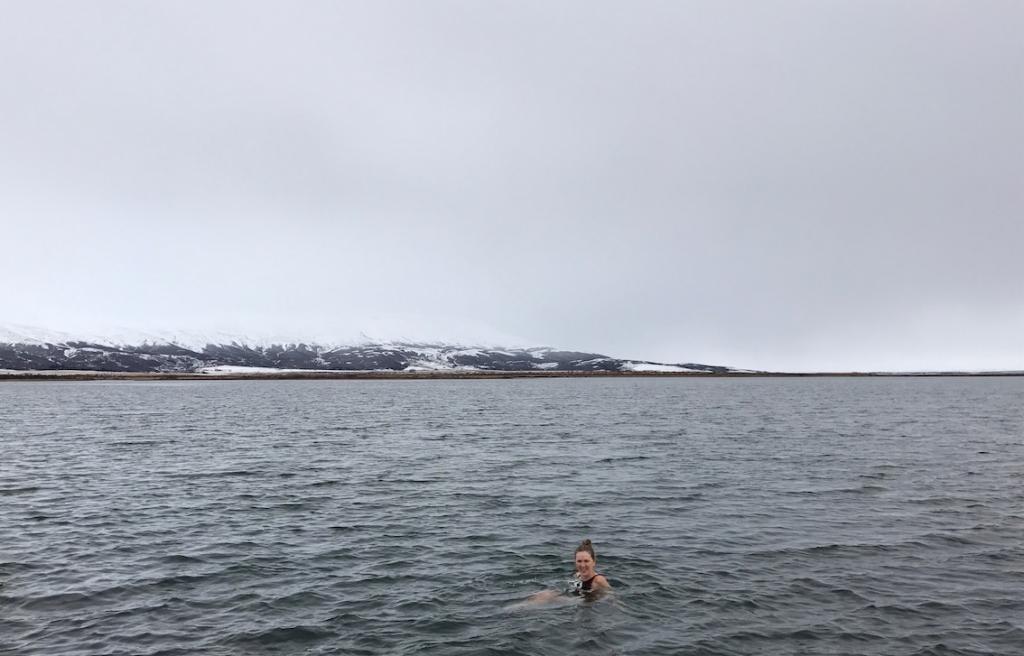 Then we headed back to Heklavik Airport and got on the afternoon flight to New York, where we landed at 19.00 and got to the city just in time for a late-night snack. Try staying in Brooklyn at either Wythe Hotel (pictured) or The Williamsburg Hotel. 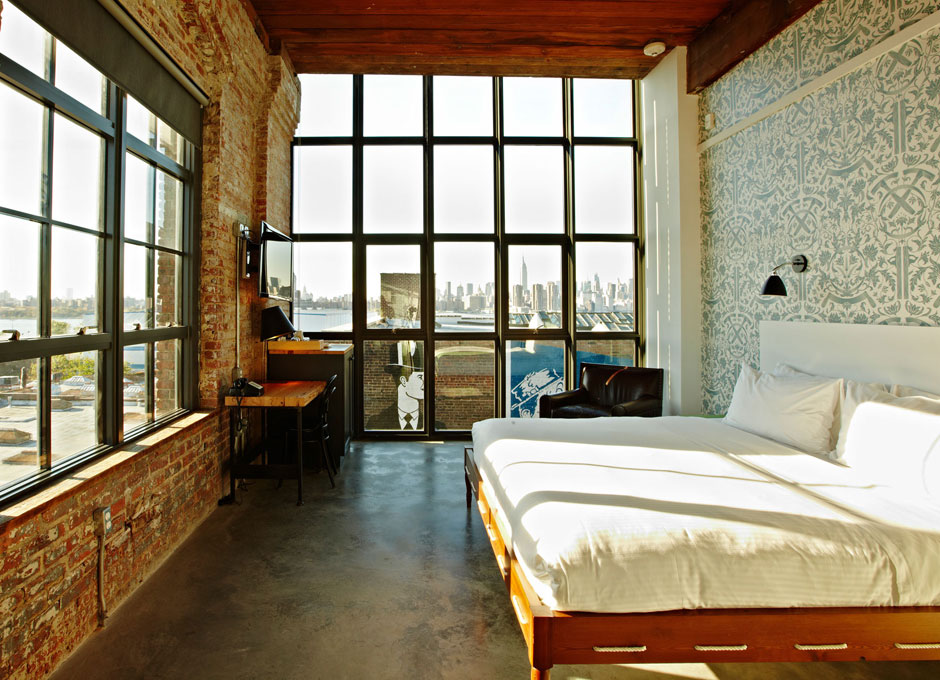 Our first day was spent exploring Queens. During my time in New York I mostly went there to visit MOMA PS1, so it was exciting to experience new parts of the borough.

An entire museum dedicated to the Japanese-American artist/designer Isamu Noguchi. Housed in a former industrial building, the museum contains two floors of exhibition space and a sculpture garden. Go on a sunny day to make the most of the garden. 9-01 33rd Street 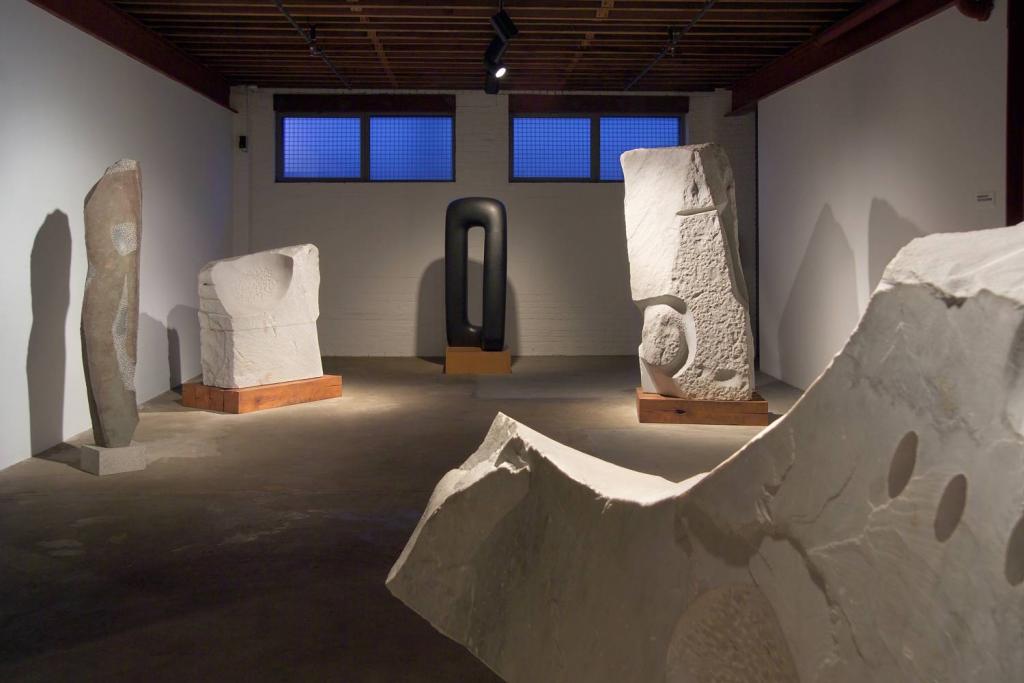 Queens is like the rest of the US a melting pot of cultures and therefore also kitchens of the world. In Jackson Heights around 82nd Street, you will find areas like Little India, Little Colombia and Little Tibet. A great way to experience Queens is to take The Ethnic Food Tour by Cititrek. We got to experience a great Nepalese restaurant in a basement, an Indian supermarket and an Indian diner just to name a few. 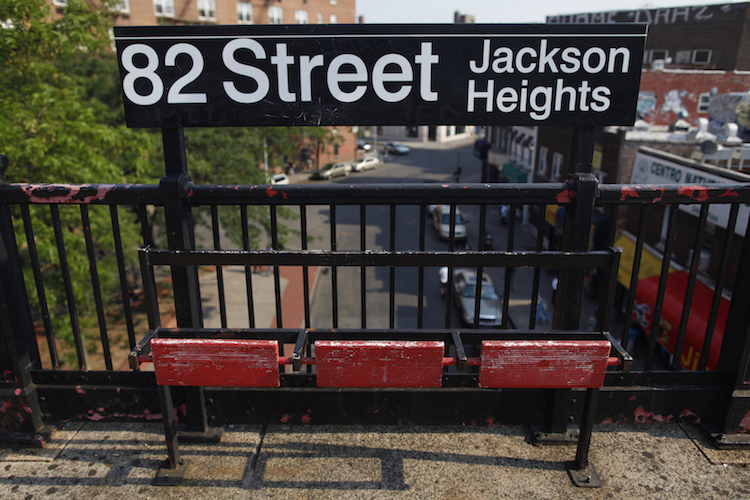 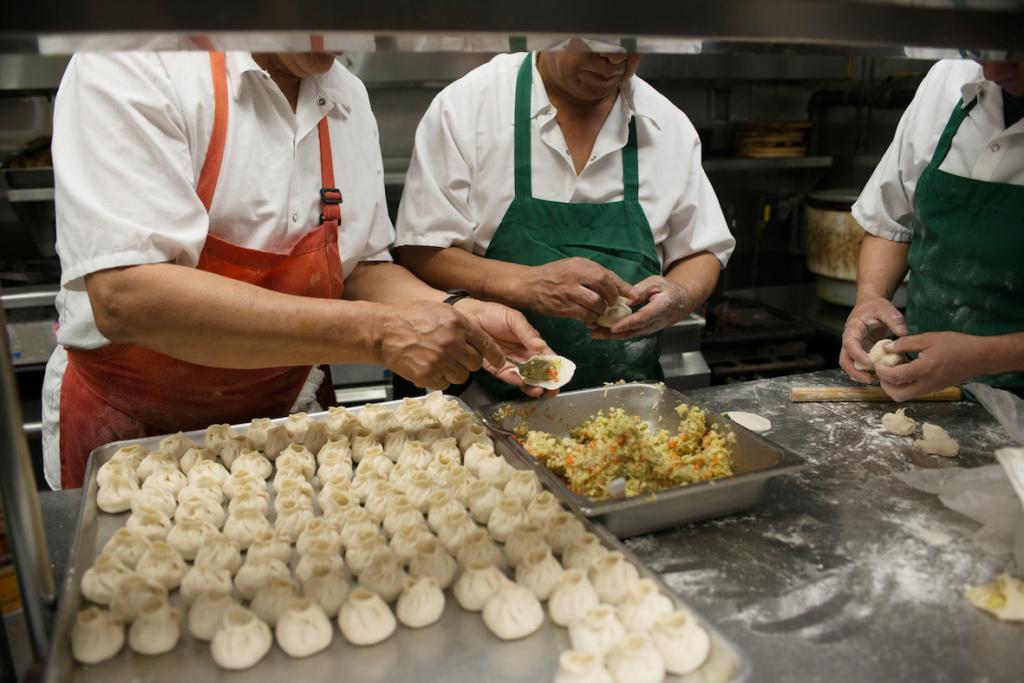 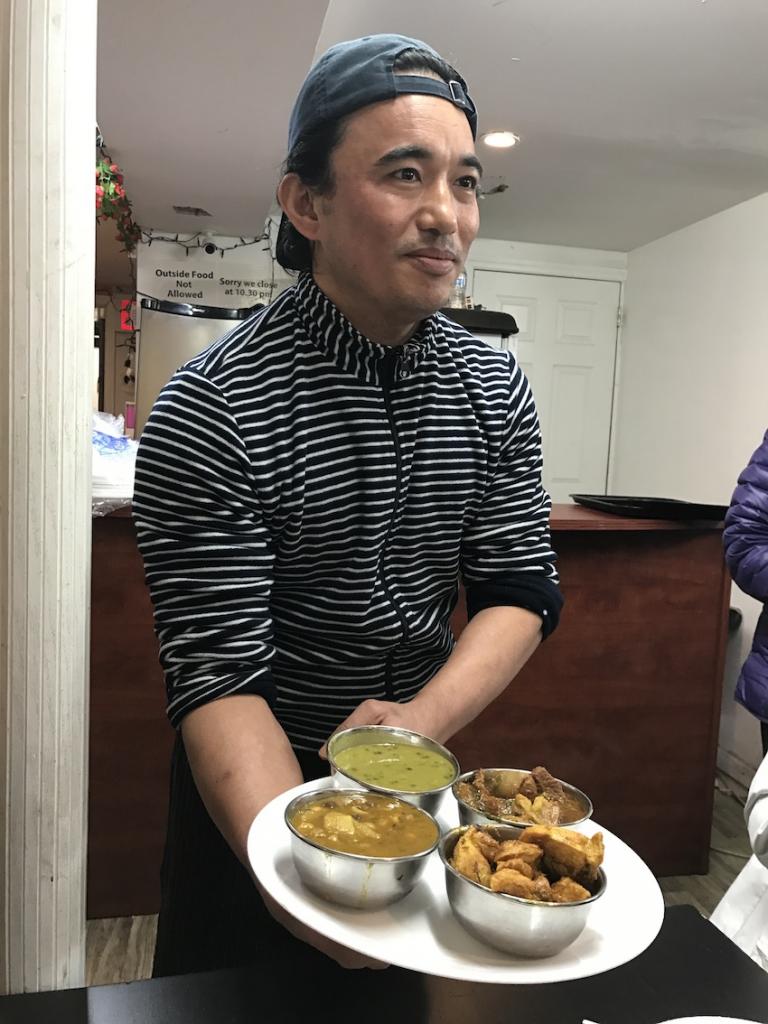 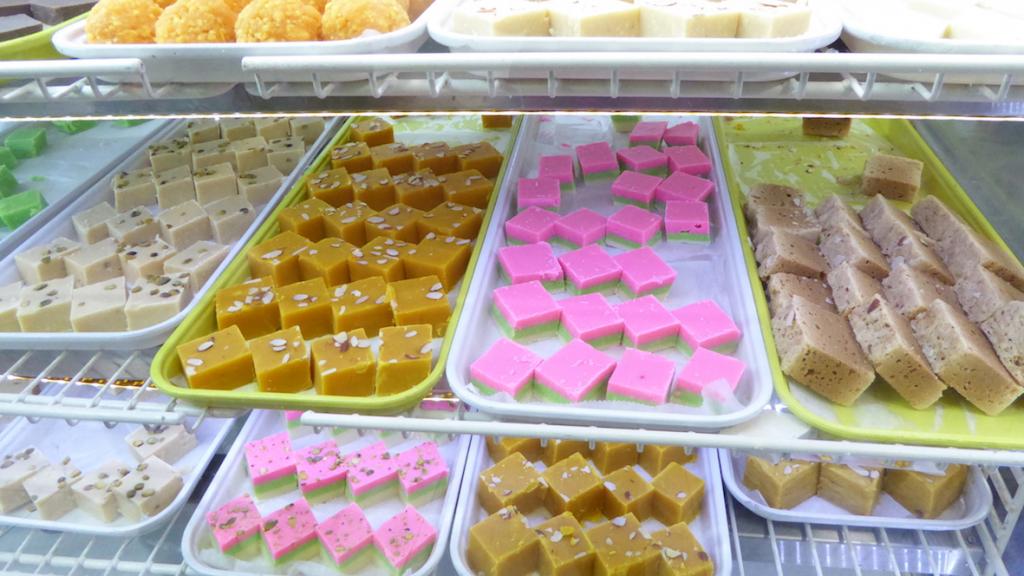 Our second day in New York was dedicated to the area of Brooklyn. This is the most populous borough in the city and it would be the third largest city in the US, if New York City was to be dissolved.

Although both areas have been quite popular over the last many years, it was interesting to see it with new eyes. And with a guide to tell you the secrets behind the buildings and their inhabitants. It will give you great insight into the two areas and their history over the last couple of hundred years. The tour is very Instagram friendly, so you will come across some of the most photographed places in the city. 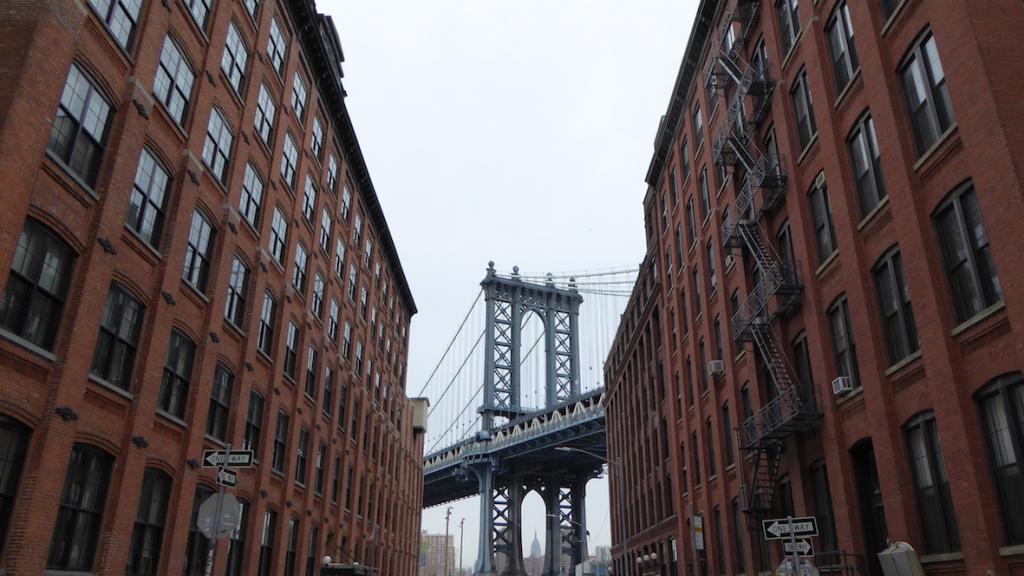 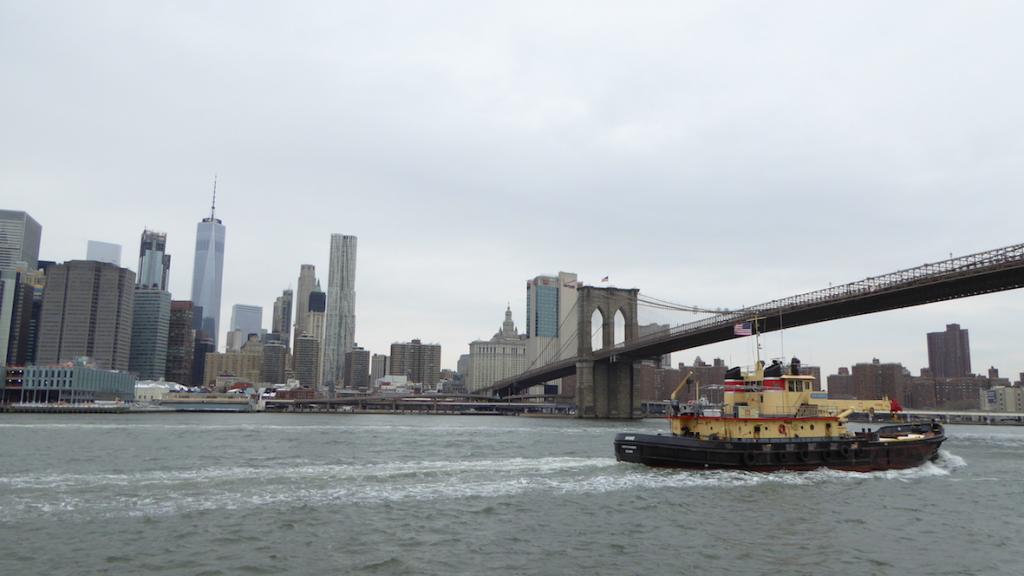 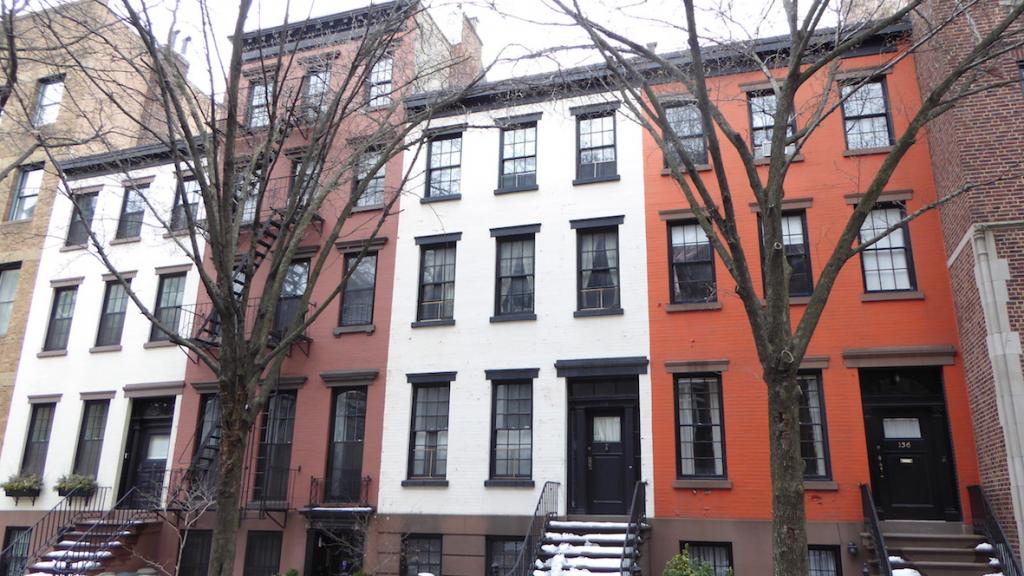 This famed flea market normally takes place on Saturdays throughout the year. When we went there, it took place at a former bank – an amazing location – where the old bank vaults were taken into use. However, they are trying to locate a new venue. For the time being it is now on Sundays under the Manhattan Bridge Archway. Check their website before going for times and locations. But it is a great spot for vintage clothing, magazines, furniture and so much more. They also run Smorgasburg, a food market with 100 local and regional food vendors. Fingerlicking good. 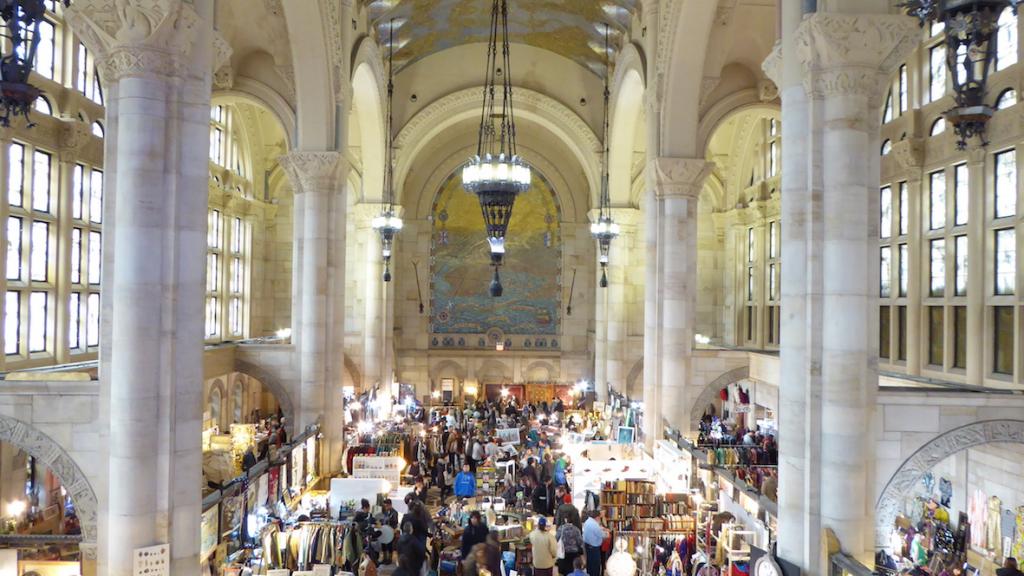 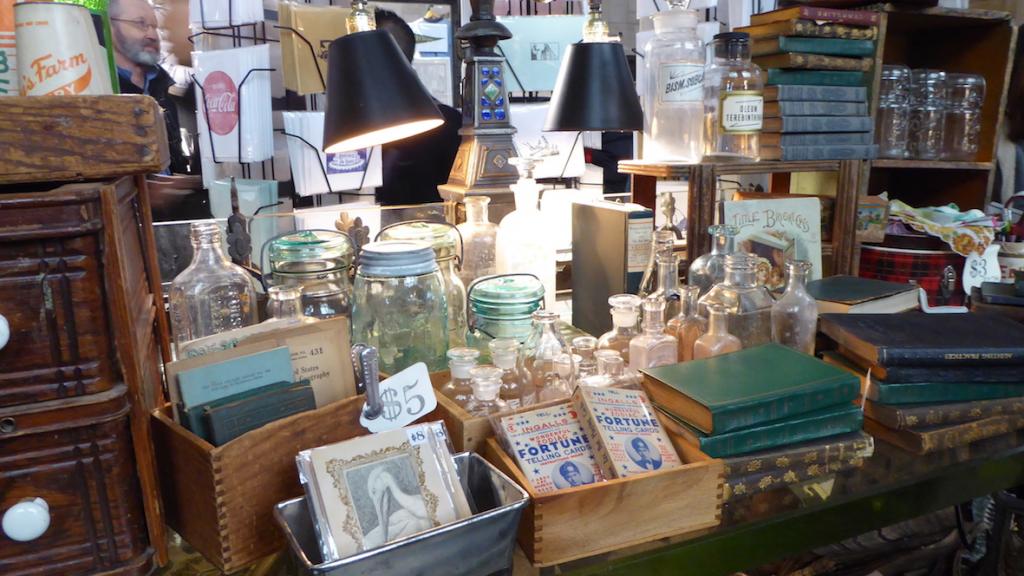 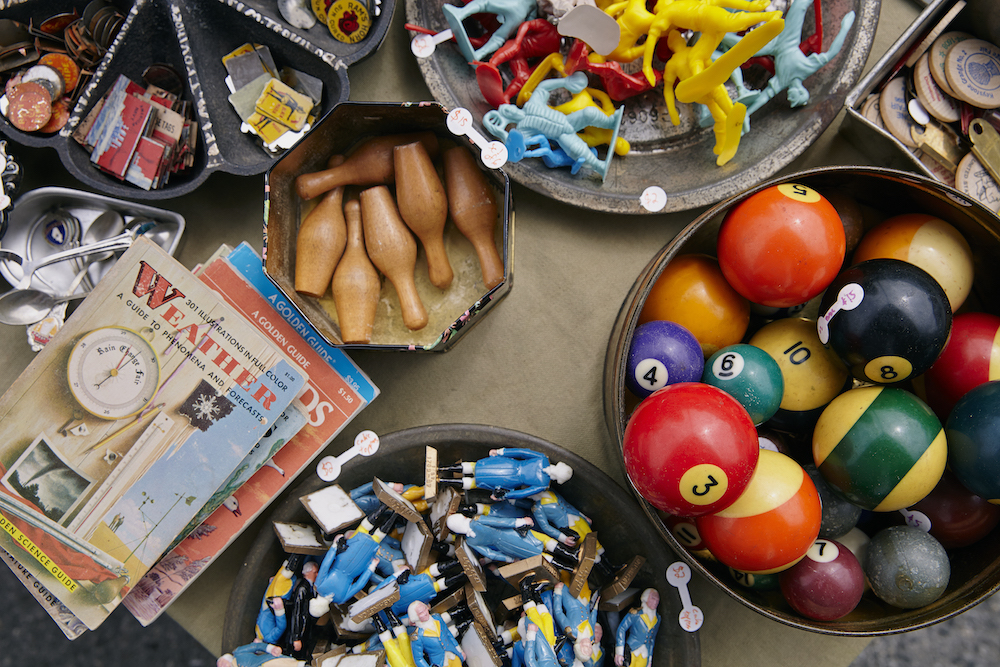 This is somewhat further out in Brooklyn, but the museum is such a treat to visit. Currently, the Georgia O’Keeffe exhibition is so worth going for. It features both her artwork and also several pieces of clothing that defined her as a person and artist. But the permanent collection of art and decorative arts is just as great. 200 Eastern Parkway 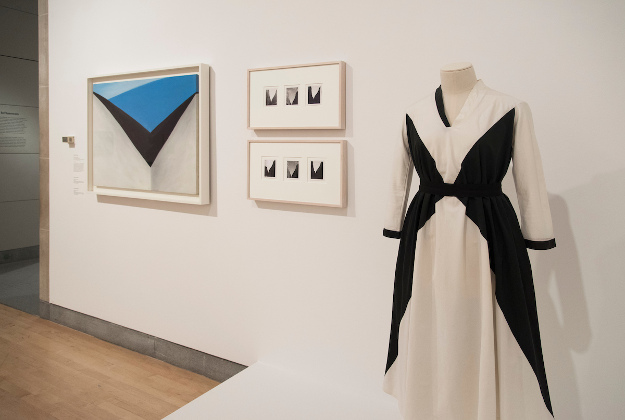 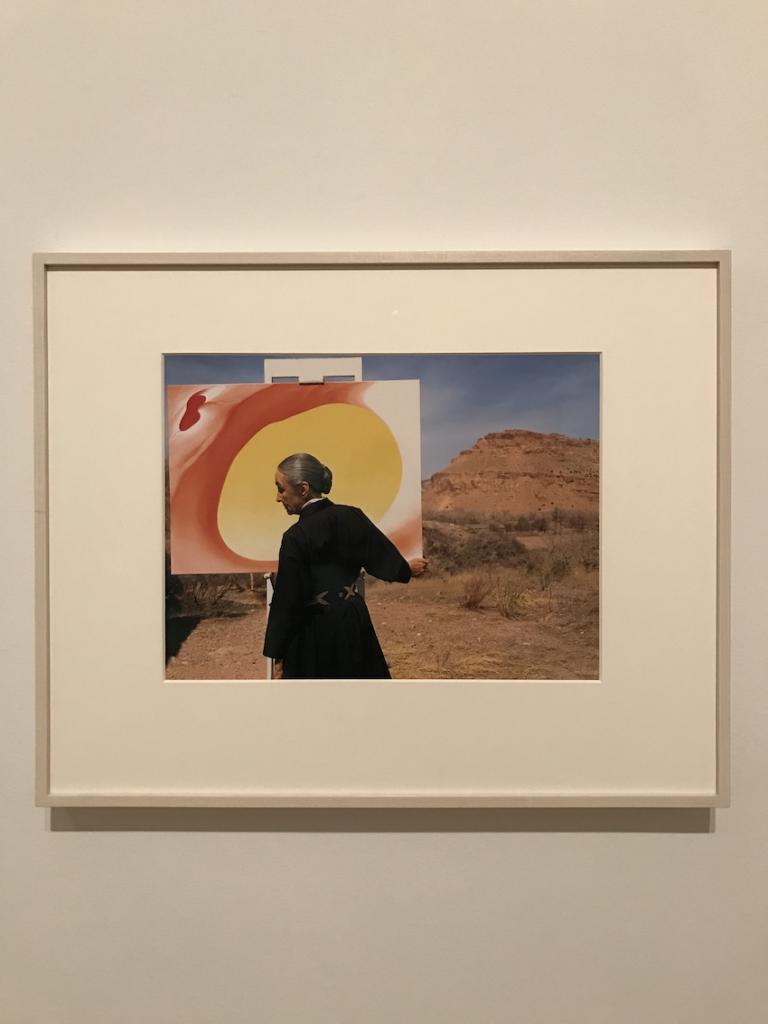 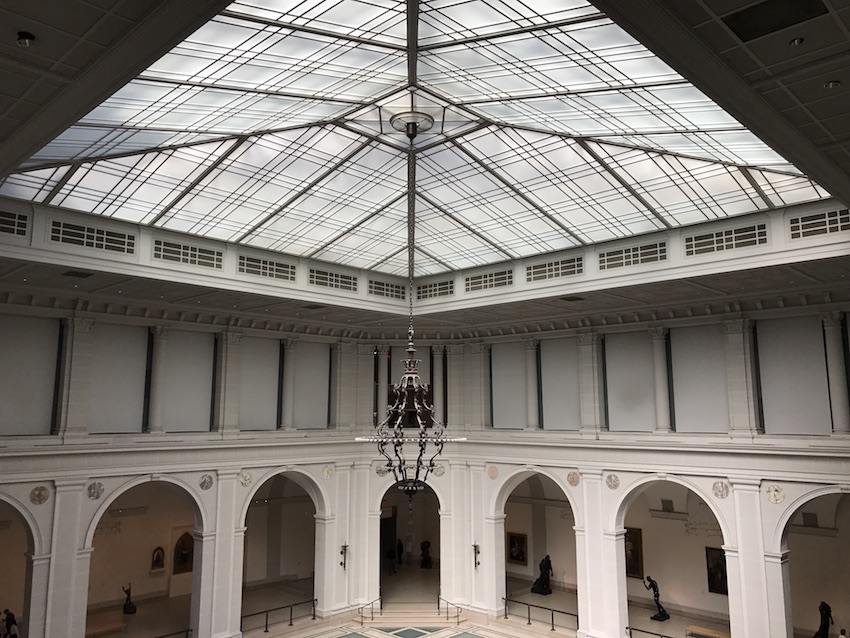 Our last day in New York was dedicated to Downtown Manhattan. A rather popular area with tourists because of the One WTC, City Hall, Battery Park and 9/11 Memorial. So it might not be so unexplored, but there are some new spots in the area.

The new WTC transportation hub nicknamed the Oculus is a rather impressive architectural masterpiece by Santiago Calatrava. 250,000 commuters use the hub on a daily basis, but the place is so big, you do not necessarily feel the traffic. The Oculus is the centrepiece of the hub and includes shopping, dining and much more. Chambers Street Station 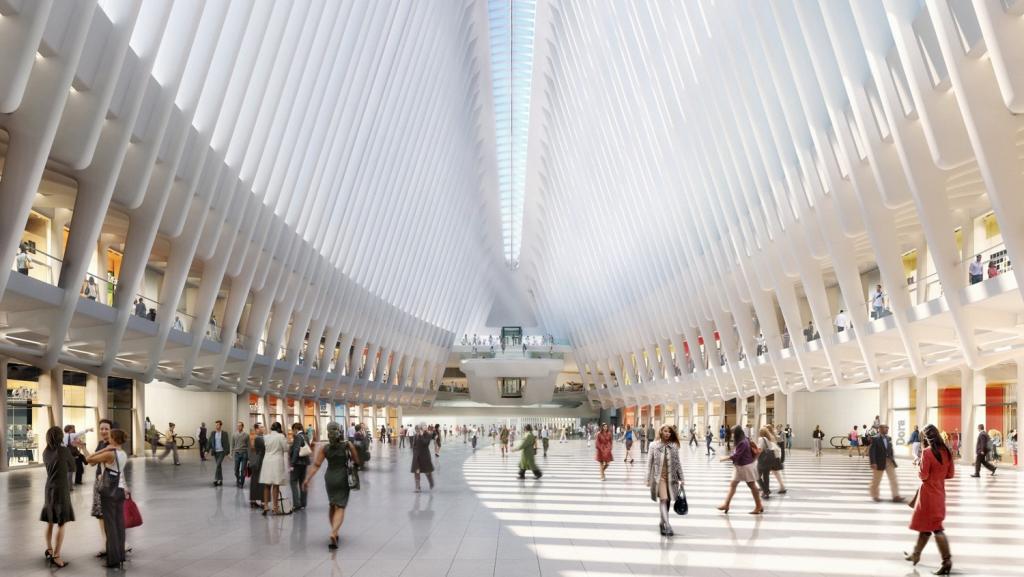 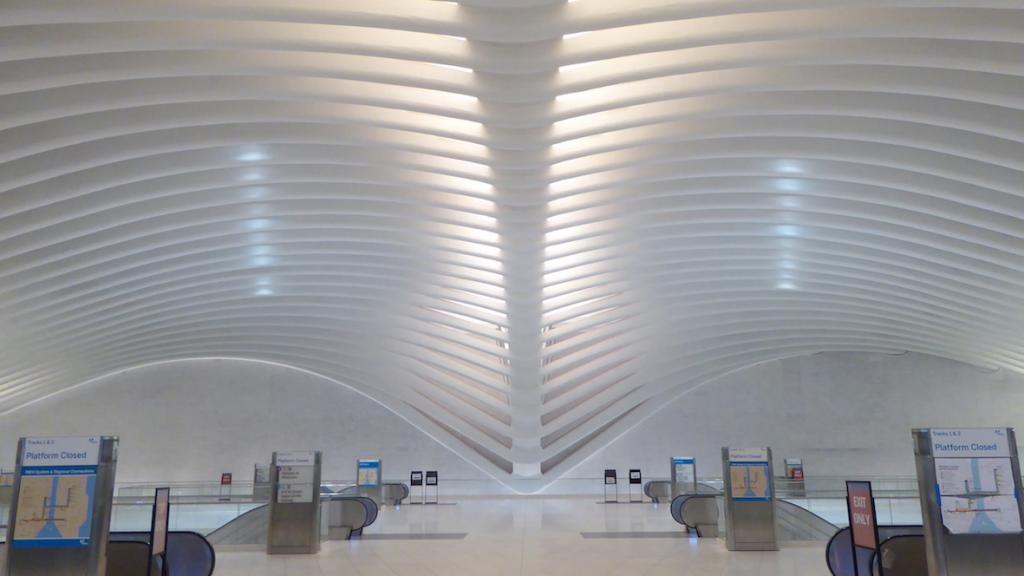 The famed food hall/marketplace for Italian food has opened in the Westfield Mall in Downtown Manhattan. Here you can get lost in Italian sausages, salamis, Parma ham and burratas. Either for shopping delicacies or having a meal in the restaurant or in one of the snack bars. 101 Liberty Street 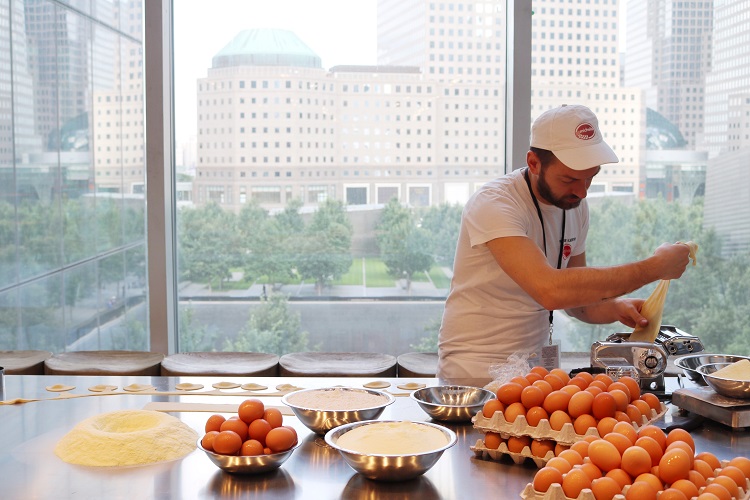 Few people have heard about it and even less know that you are able to visit this place. The abandoned City Hall Station has now been opened up to the public. The New York Transit Museum is now offering tours of the station – at a cost naturally. The station was closed down in December 1945 and has been granted interior landmark status. Be sure to go on a day in sunlight in order to properly see the beautiful skylights in the ceiling. 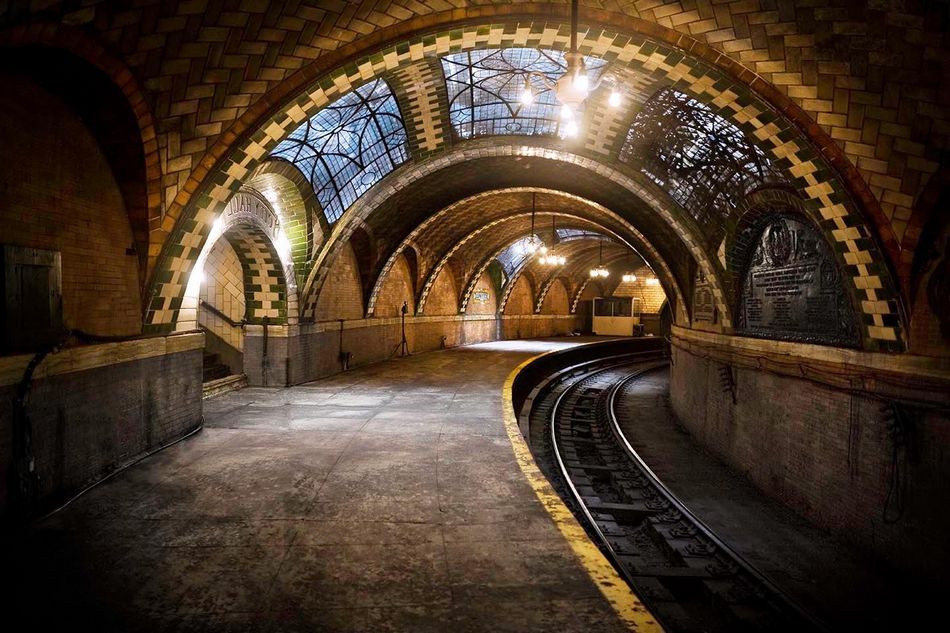